2 years ago • By Priyanka Sancheti 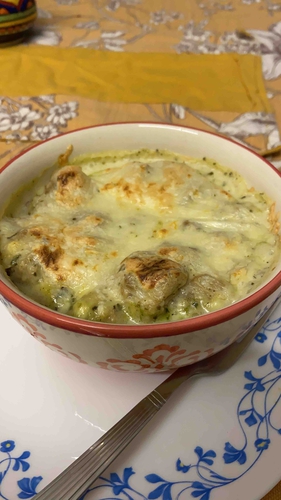 1. Step 1- In a pan, take 1 gm of ghee, put in the green chillies and saute the onion. Add blanched, chopped spinach. Add a tsp of milk, salt and pepper to taste. Stir for 30 seconds to mix altogether and put it as the base of your bake dish

2. Step 2- put the remaining ghee in a pan, add the atta and stir until you get a nice smell. Switch off the flame and while stirring continuously add the cold milk. Mix well so that no lumps are there. Switch on the gas and keep stirring the sauce, add a cheese slice, herbs, salt and pepper. Switch off the gas once the cheese melts. The white sauce is done

3. Step3- soak the soya nuggets in boiling water for 10 mins. Once puffed, squeeze the excess water and stir in the soya nuggets in the white sauce prepared in step 2. If the sauce thickens too much after adding soya, then add a tsp of water to mix well.

4. Step 4- add the soya white sauce on top of the spinach base. Top it up with grated cheese and bake it an oven till the cheese becomes golden. Serve hot