3 years ago • By Maninder Kaur 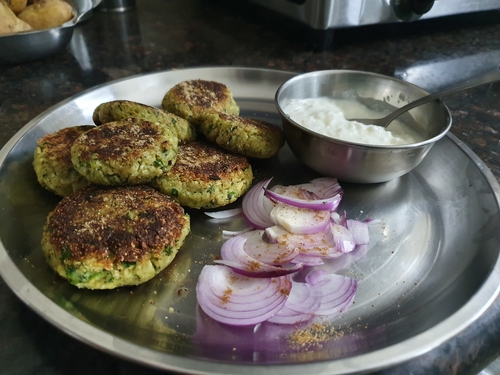 1. Boil cauliflower with a bit of salt. Drain water. If you prefer it crunchier, boil it a little less and crush it in a mixer grinder or chopper. I did this. Boiled for 5 mins approx. if not boil it more and mash it. that should give a bit potato like texture.

2. Boil Soya granules with salt. Drain, squeeze out water and keep aside.

3. Mash the paneer. If its too dry or hard just soak it in a bit of hot (not boiling hot) water for a few mins before mashing.

4. Mix paneer, Mashed cauliflower, soya granules, Chopped methi, grated cheese, fresh ginger, green chilli and mix them in a mixer grinder. (I didn't mash the cauliflower just added it in this step. Don't blame me for shortcuts, it was 8pm and I was hungry :-P)

5. Mix them well. It will have texture almost like a paneer bhurji, which it sort of is anyway.

6. Take out the mixture, add in the dry ingredients, spices, semolina. Mix well and knead the mixture a bit. Let it sit for about 5-10mins. Again I am always the one for shortcuts because hey after 9hrs at work I want to be in an out of the kitchen asap, so u started with the next step anyway only resting till the pan was heating up.

7. In a non stick pan heat up oil/ghee. I started with 5gms. Once the pan is heated put it on medium flame. Make round shape cutlets or any shape you prefer. Don't make them too thin. These are still on the drier side and might break. Don't worry about undercooking the inside because hey we already boiled the heck out of cauliflower and the soya which make the bulk of this. Rest of the ingredients won't take much time. But still keep the flame on medium or medium-low.

8. Shallow fry the cutlets as per your pan. my pan was small so it accomodated about 3 cutlets in one time. I added more ghee in the second round because it was left within my macros for the day. You can skip in this bit if using a non stick pan.

9. Roast as per your liking, serve with some thinly sliced onions, curd or chutney.

10. NOTE: Macros of curd are not included in this recipe

11. Macros mentioned are for the entire batch of cutlets.