1 year ago • By Adbhut Parihar 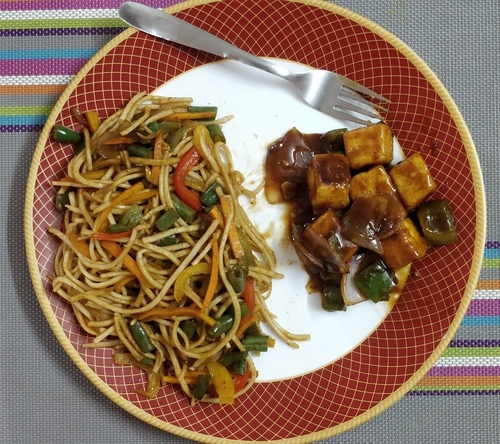 Ingredients for Noodles and Paneer manchurian

1. In a large pot heat water, salt and being it to boil. Then add the noodles in the boiling water and bring it to cook as instructed in the packet.

2. Once cooked, strain the water and set it aside.

3. Take a pan and put some oil in it (from total oil). Stir fry the veggies (capsicum, carrot, french beans etc) on high flame. Add the sauces and toss it well.

4. Add the boiled noodles and toss it well with veggies.

6. Add paneer in this mixture and toss it well so that the paneer is coated with a layer of the mixture.

7. Take another pan and add oil, garlic, cubed onions and cubed capsicum in it. Saute it well and then add the sauces. Mix it well.

8. Take a small bowl and add the rest of the cornflour in it. Pour some water in the bowl and give it a mix.

9. Pour the cornflour mixture into the pan and mix it with veggies. Add water as per your need.

10. Put the sauteed paneer in the pan and mix it well. Give it a boil and you are done.