2 years ago • By Nafeesa Saleh 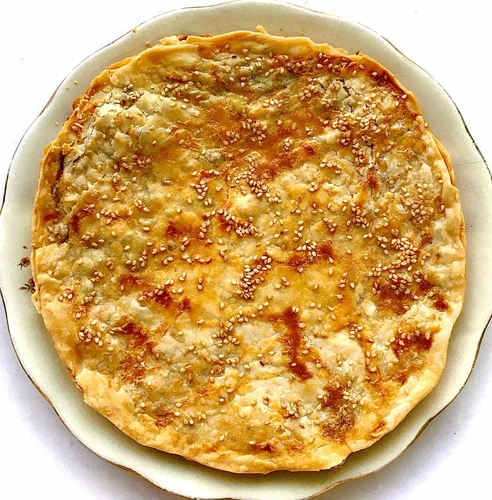 1. Mince chicken adding ginger, garlic and green chilly and take it in a skillet. Add little water and cook it thoroughly while continuously scraping it from bottom and sides with wooden spatula until you get soft and uniform grainy structure and take it in a bowl.

2. Now, chop the onion in a chopper and add little salt. Take it in a muslin cloth and squeeze out the excess water from onion and add it to cooked minced chicken.

3. Boil one egg and then cut it into small pieces and add it to the bowl as well. Also, add all dry spices, chopped capsicum and chopped coriander and give a nice mix.

4. Now make a dough using maida, water and salt and divide it into small portions as that of poories. Roll it using rolling pin as same as size of poori. Usually one can make 10-12 small discs out of it.

6. Now, roll the stacked discs (pooris) using rolling pin into a big disc (chapati). Do the same for other set. You will have two at the end.

7. In a nonstick/baking circular tray or springform pan, brush the ghee at the bottom. Layer the disc of dough over it. Now beat the egg adding salt and pepper powder and spread 1 tbsp over the chapati. Then, pour in the minced chicken filling and top it with 2 tbsp egg mixture. Fold the top layer by other disc and press the edges together to form a seal.

8. At last, mix the remaining ghee into egg mixture and brush over the pie. Sprinkle sesame seeds and bake it in oven for about 30-40 minutes at 160 degree C. I have used otg. You have to bake it until you get golden brown colour. Enjoy 😋