2 years ago • By Manali Bardhan 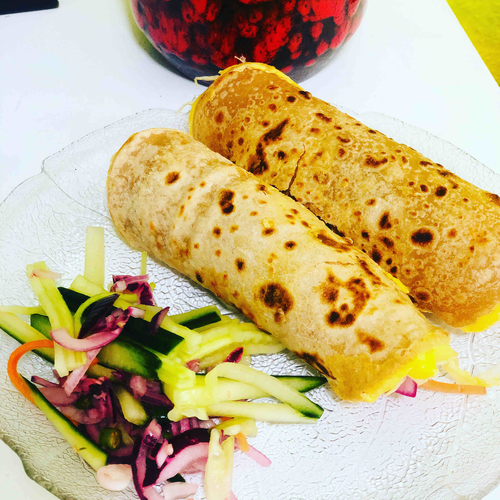 1. Knead a smooth dough with the mentioned quantity wheat flour, add a pinch of salt, stevia and 4 gm of ghee.keep it covered for sometime.

2. Take a bowl and add the onions , finely chopped green chillies and squeeze lemon juice and a pinch of black salt and give it a mix. This will help to remove the raw smell of onion and the taste of onion will enhance.

3. Now cut the dough in two halves. Take the first half and make a roti our of it. Then make lachhas (layering ) of that roti and then again flatten it to a thin roti.

4. Heat up a pan and put some ghee/oil. Put the roti/paratha and fry it . Keep the flame medium. Now when once side is done flip it over and cook it for some time around 1 minute.pour half of the egg mix on the top of the roti and spread it evenly . Now with the spatula keep beating the egg on top fir 30 secs and then slowly flip the roti so that the remaining liquid egg part falls on the pan and then place ur roti again on that egg mix .cover it and cook for 1 minute.

5. Once the roti is out of the plan , place it in a plate. Season it with some chat masala and black salt. Put the pickled onions. On top of that put the carrot and the cucumber slices. Squeeze some lemon. Now put some tomato ketchup on top of that followed by some chilli sauce/ habenaro/ tobacco any hot sauce depending on ur spice tolerance level.