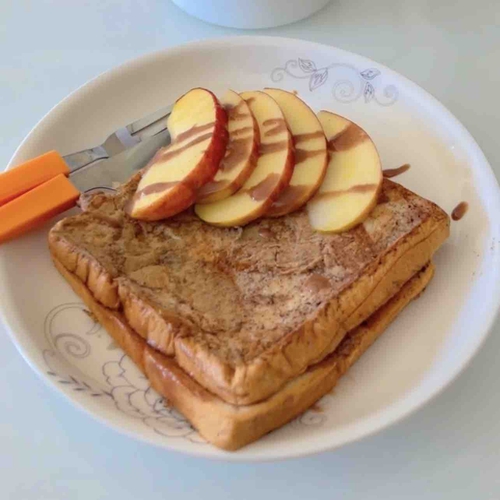 1. 1. In a separate bowl take cream cheese, Greek yogurt, whey and mix until will combine. Throw in fruits of your choice, and keep it in fridge for few minutes. It will quickly become ticket while you continue to prepare egg batter (I have used apple for this recipe) 2. Whisk egg whites with cinnamon, almond milk, vanilla essence or sweetener of your choice ( You can use whole eggs too if your diet allows, it tastes equally delicious. I have used stevia for my recipe) 3. Make pockets on bread slices to add stuffing later 4. Soak two bread slices in whisked egg on both sides (Don't soak for too long, else it becomes soggy. A quick dunk all around works best) 5. Heat a skillet and spray oil (I have used coconut oil but you can use anything as per your choice) 6. Put both slices and let them cook on one side (If any egg mixture is left you can use it while toast is cooking in pan) 7. Now put all stuffing in one of the bread slices pocket and put another slice on top and press the edges properly to keep stuffing intact inside. 8. Cook on both sides as needed and viola high protein stuffed french toast is ready🤤