2 years ago • By Janina Schwalb 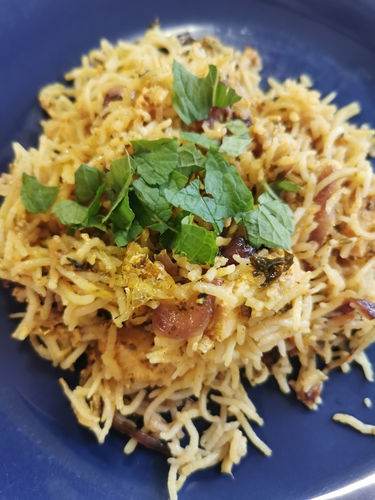 1. Marinate Chicken: Grind ginger and garlic to a paste. Add ginger-garlic paste, green chili, chicken breast pieces and yogurt to a bowl. Add 0.5 tsp of turmeric powder, chili powder, green cardamom powder and 2 tsp of salt and biryani masala (I used Bombay Biryani Masala). Mix well, cover with a lid and keep it in the fridge. This is best done the night before!

2. Wash rice thoroughly until all extra starch is removed. Soak for 40 minutes.

3. Meanwhile fry Onion: Slice onion. In a non stick pot (ideally the one that you will use to cook biryani later) melt 10 g of ghee. Add onion slices and fry on medium heat until golden brown. Remove onion and keep aside - don't remove ghee from the pot.

4. Cook Rice: Drain rice. In a pot add 500 ml water and whole spices as well as salt to taste. Let it boil for 5 minutes. Then add rice and cook without lid until 75% done. Drain (you may remove whole spices if you want to avoid biting on them later).

5. Cook Biryani: Add an other 10 g of ghee to the non stick pot that you used earlier, let it melt. Add chicken together with Marinade. Add half of: fried onions, mint and coriander leaves. Mix and spread it evenly on the bottom of the pot. Then spread previously cooked rice evenly on top. Sprinkle other half of the fried onions, mint and coriander on top.

6. Mix almond milk with 0.5 tsp of turmeric and biryani masala, pour it on top. Sprinkle what's left of the ghee (5 g).