2 years ago • By Reena Davis Basil 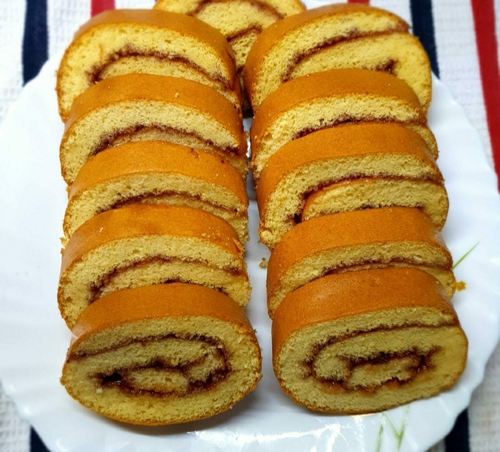 Ingredients for Swiss Roll with 3g protein per slice.😋

1. Separate the yolks from the egg whites, for all 6 eggs.

2. In a bowl, using an electric beater, beat together the egg yolk and sugar, until you get a voluminous creamy texture. It will become a pale yellow colour.

4. Add the yolk+sugar mix, into the egg white mix, and fold in (don't use the beater, or stir vigorously) the mixture until well blended.

5. Sift the flour and baking powder, and add into the above mixture. Fold in the flour, until you don't see any more flour.

6. Into another bowl, pour in the oil and milk. To this, add half of the egg mix, and fold in. Add this mixture to the remaining egg mixture. Fold in, until blended.

7. Line a 9x5 inch tray with foil paper. Pour the batter into the tray and level it out, so that its even in height all through. Lift up the tray with the batter, and then gently but firmly tap it on the counter, to remove the extra bubbles.

8. Bake in the oven at 170⁰C (preheated), for 30 min. Take it out from the oven, and immediately peel off the foil to avoid wrinkling. Place the cake on wax/butter paper, with the smooth side facing down.

9. Trim off all the crusty sides. On the side where the foil was peeled off, evenly spread the cream cheese and jam.

10. Using the wax paper, gently roll the cake from one end to the other making sure its evenly rolled and tucked in. Seal with the wax paper, and refrigerate for 1 hour. Remove and slice into 18 pieces. Store the slices in an airtight container in the fridge.

11. Note: Adjust the cream cheese and jam as per your taste amd macros. Bon apetit! 😋