WILL REFEED MAKE YOU LOSE WEIGHT? 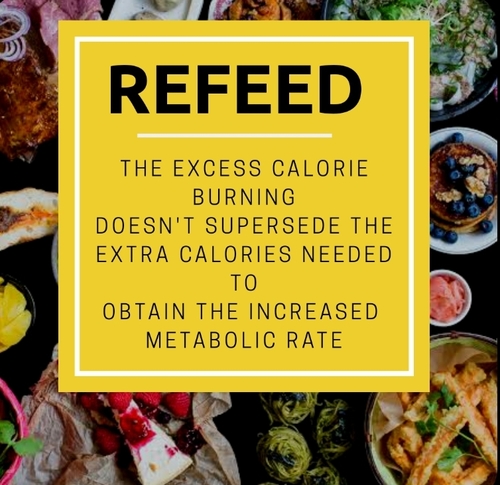 For example, let’s say you needed 2000 calories to boost your metabolic rate by 1000 calories, you’re still in a net negative. It would be equivalent to spending 200 to gain 100 rupees In the study cited above, it was found that a 3 day overfeeding in carbohydrate intake did produce an increase in energy expenditure and leptin levels, however, this didn’t equate to an increase in energy expenditure that would supersede the calories needed to produce the increase. Further, it was hypothesized that the increase in energy expenditure was likely due to an increase in TEF and NEAT, not BMR. If you equate weekly calories you can undulate your daily calories and have high and low days, there doesn’t seem to be a difference in fat loss, whether you choose to undulate calories or keep them stable during the week. (https://www.ncbi.nlm.nih.gov/m/pubmed/20921964/). Having high and low days can give you the psychological “break” from dieting, but simply eating in a surplus to further the fat burning effect doesn’t seem to be supported by science. Rather counterproductive as you will be gaining more weight #fittr #fitness #nutrition