Why You Should Beat The Butt ASAP 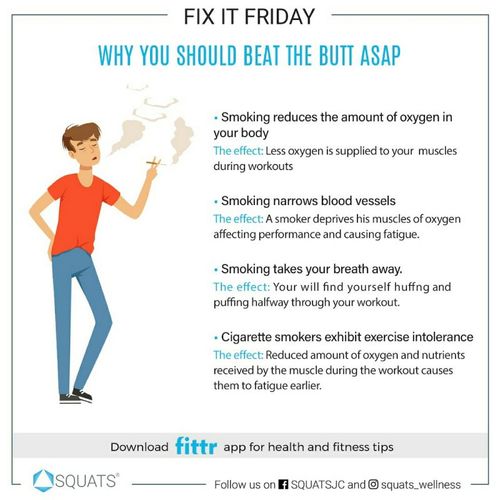 #Fix-itfridays: SQUATS Expert Isra Halim tells you what should give up smoking ASAP.

As regular cine-goers in India, most of us can visualize the hard-hitting anti-tobacco campaign where a dummy lung is wrung to demonstrate the amount of tar that accumulates in the lungs of a smoker. Statutory warnings on cigarette boxes with gory images of cancer-affected gums has been made the law. Smoking in public has fines inflicted on violators. You have considered quitting the butt on multiple occasions; you try convincing yourself you are doing everything else right – eating clean, working out and this is the only vice you have. Ever given a thought on how smoking is affecting your workouts? Consider this: 1. Smoking reduces the amount of oxygen in your body. Carbon monoxide produced attaches to your blood cells in a high affinity chemical reaction to form carboxy-haemoglobin not allowing adequate oxygen to attach to your blood cells. The effect: Less oxygen is supplied to your muscles during workouts 2. Smoking narrows blood vessels Nicotine decreases the lumen of your blood vessels. Carbon monoxide potentiates the deposition of plaque in your vessels. This limits the flow of oxygen-rich blood to your organs and other parts of your body, making exercise harder. The effect: Your muscles require tons of oxygen while you are working out. The blood flow to the muscles increases during exercise through which oxygen is supplied. A smoker deprives his muscles of oxygen affecting performance and causing fatigue. 3. Smoking takes your breath away. Quite literally. Within seconds, smoking increases the airway resistance making breathing a daunting task. Remember the tar from the aforesaid commercial? Your lungs are coated with tar thus not allowing physiological gaseous exchange. Another puff and the linings of your airways swell up making breathing even more laborious. Before you know it, the lung has an impaired maximum oxygen uptake capacity (VO2 max). The effect: You leave your workout halfway through, huffing and puffing your way to the exit. A few months down the line climbing a flight of stairs is now a task. 4.Cigarette smokers exhibit exercise intolerance And we thought that was bad enough. Recent studies have more bad news. Smoking is postulated to directly cause muscle damage by reducing the number of blood vessels in muscles, The effect: Reduced amount of oxygen and nutrients received by the muscle during the workout causes them to fatigue earlier. Did someone mention New year's resolutions? You know what to do. Beat the butt today!