What happens when you do not sleep? 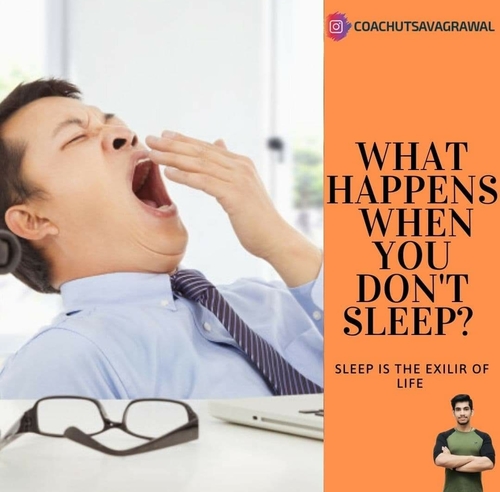 According to the WHO and the National Sleep Foundation, 2/3rds of adults in developed nations fail to obtain the recommended 8hrs of nightly sleep. Routinely sleeping less than 6hrs a night destroys your immune system, more than doubles your risk for cancer, acts as a precursor for Alzheimer’s in later life. Even moderate reductions of sleep can disrupt blood sugar levels so profoundly, you could be classified as pre-diabetic if tested(M.Walker, Why we Sleep).

Dr. Eve Van Cauter experimented to test whether sleep reduction has an impact on obesity and weight gain. There were two groups, group A, 8-1/2 hrs time in bed, group B 4-1/2 hrs time in bed. These groups slept under these conditions for four nights, both groups were limited to the same amount of activity and given the same access to food. Researchers tracked and counted the difference in calorie consumption, group B ate, on average, 300 calories a day more! Well over 1000 calories more by experiment end than group A. A linear experiment was done, give the sleep-deprived group 5-6hrs time in bed over 10 nights with very similar results(M.Walker, Why we Sleep) Need more reasons to sleep, car crashes are amongst the leading cause of death in most first world countries. In a study looking at over 7,000 drivers tracked over 2 years, it was found. Operating on less than 5 hrs of sleep a night, your risk of an accident increase threefold. Get behind the wheel of a car on four hours or less a night, you are 11.5x more likely to be involved in a car accident(M.Walker, Why we Sleep) Some people wear their lack of sleep as a badge of honor and show it as a skill they have mastered over many sleepless nights. The data is clear. Sleep is the elixir of life and should be treated as the MOST important task you partake in your 24hr cycle.

Hi utsav, nice article. can you please suggest how can i share this article with others?