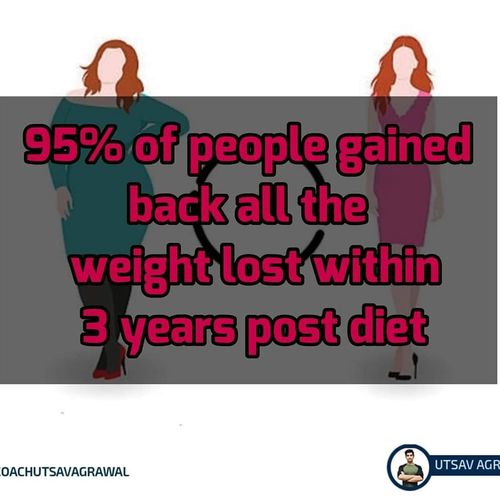 Dieting Psychology
Despite what the companies or social media influencer told you, we do NOT have a weight loss problem, we have WEIGHT REGAIN problem, the statistics on people initially losing weight are extremely positive, six out of every seven people who attempt to lose weight indeed do. The issue is that 80% of people are unable to maintain a 10% reduction in weight within the first year, with most relapsing to their pre-diet weight. To pile on further, over 95% * of people gain back all weight lost within three years post-diet, this means that diets have only a 5% success rate.

Researchers analyzed twenty-nine studies and found that after a weight loss program people were only able to maintain less than 3% of weight reduction after five years. This means if you were able to lose 20 kg, which is no easy feat, after five years, statistically speaking you might gain back 19.4kg for a net total of 0.6 kg lost, bleak isn’t it. *Data is on American Public So now Understand why it happens- Yo-Yo dieting Yo-yo dieting is doing intermittent crash/fad diets and losing some weight and gaining it back which makes weight loss perpetually harder and harder with each failed attempt. Not only it will have an impact on your metabolism but also might result in losing muscle mass, increased fatigue, etc Guessing If I gave you a math problem to solve but didn’t extend to you the fundamentals of the equation with which to solve it, wouldn’t it be nearly impossible to solve the problem? I mean sure, you could just guess numbers upon numbers until failing over and over and over again, except in the case of our bodies, the “math problem” gets exceedingly more difficult with every failed attempt. Without an extent understanding of the science behind weight loss, the “equation”, you are inputting numbers into this hypothetical math problem doomed to perpetually fail without question. Yeah, of course, learning about calories, TDEE, etc seems to be a daunting task now but without learning basics you will be wasting your time and making lose weight harder not just for a brief period you are trying random strategy but also after that Will continue this topic in my next post that I will publish tomorrow References - 1.https://www.ncbi.nlm.nih.gov/pubmed/16568134 2.https://www.ncbi.nlm.nih.gov/pubmed/11684524 3.https://www.ncbi.nlm.nih.gov/pmc/articles/PMC3174765/

yes... even I was under the mentor lost good kgs n gained back... n next time I tried myself n gained more than what I have lost... what I got as a lesson was too low cal diet 1200kcal.... I always feel fatigued , tired n thinking of gym gave me headache... just wanted to know after how many weeks one should Ideally go for diet break... my height is 5ft 1inch n weight 57 kgs... so have to lose 7 kgs... I lost 7 kgs in 6-7weeks that too twice but it all bounced back... n again m at 57 kgs 😂😂 how should I proceed now...