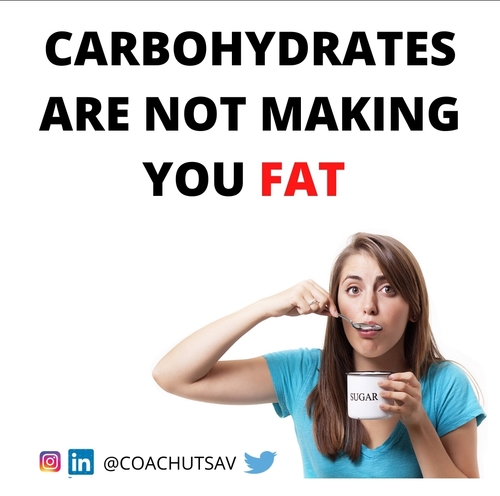 Stop this anti-carb movement - Carbohydrates are not bad

Nutrition
According to the very vocal anti-carb movement, there are three main culprits: Public Enemy #1 is, of course, carbohydrates themselves. Next on the hit-list is sugar. And the third one is insulin, the hormone that is allegedly responsible for all the adverse effects of the first two.

We don’t hang anyone merely on suspicion. So, before we announce the verdict, I am going to uncover and examine the three major claims that have been levelled against these three culprits. Claim #1: A high-fat diet is superior to a carb-based diet for fat loss Carbohydrates are considered the primary reason for obesity and skipping them entirely is thought to be the best strategy for fat loss. But does this hold true? According to one study, 17 obese men were given a baseline high carb diet for four weeks, followed by four weeks of the ketogenic diet. The study found that there was no difference in body weight loss between the high carb dieting period and the high-fat dieting period. Claim #2: Sugar makes us fat Sugar, that old "evil" molecule sucrose (table sugar)! Consuming a diet high in table sugar has to be a bad thing, right? I mean, you can't possibly lose weight and improve health by eating sugar. In a six week tightly controlled study, group A consumed 12g of sucrose daily. In comparison, group B was consuming 121g (that is almost 30 teaspoons of sugar daily), and the calories were equated in both groups. Surprise surprise: there was NO difference in weight loss. Not just that, both groups saw improvements in health biomarkers such as weight, fat mass, and blood pressure. There have also been more extended studies (6 months), such as this one which compared the long term effects of simple carbohydrate intake vs. intake of complex carbohydrates. Again, no prizes for guessing what the results showed: there was no difference when calories are equated. Now, I am in no way saying that you should consume table sugar as much as you want, but to call it a "toxic" molecule is not correct. Instead of demonizing an entire food category, learn how to incorporate it into a healthy and sustainable lifestyle. Always remember - "Moderation is the key." When it comes to sugar addiction and the claims that it is as addictive as cocaine, it's outright propaganda to sell you waste products such as keto pills. Foods that we would typically call "addictive" like cookies & desserts have more calories on account of fat rather than from sugar. Plus, many of these foods are engineered to have a specific taste and a perfect bliss point. Unless you're shoveling handfuls of table sugar into your mouth every day, you are not suffering from sugar cravings. But let me discuss this as well: why should you avoid sugar while losing weight? The main principle behind weight loss is a caloric deficit. In such a state, you are already cutting some calories that means relatively less food. When there is less food in your diet, it makes more sense to prioritise high satiety food, not food items which are loaded with sugar. Claim #3: Insulin is the reason we gain weight The word INSULIN is not new to us. It’s become one of the most talked about and dreaded words of the past decade, mostly because we link it to fat gain. But what exactly is Insulin? Insulin is a hormone secreted by beta cells of the pancreas gland in your body in response to increased glucose levels. Now, the level of glucose depends on the conversion rate of food items into glucose. Carbohydrates are known for increasing glucose level. But did you know that even protein raises your glucose level and hence insulin? In fact, whey protein can raise glucose levels more than white bread. That’s because whey is fast digesting. The concept is simple: when you eat food that converts into glucose and produces energy, it raises your blood glucose level. In order to bring it back to the average level, your body secretes insulin. So, we can say that this is a vital process for our existence. Still, some people have made glucose fluctuation and insulin the devil incarnate which is not true at all. Insulin is not needed to store dietary fat into adipose tissue; the net balance will determine whether the effect is fat loss or gain. Okay, let's talk some proof: A study was conducted with two groups of people with the same calories and proteins: GROUP A: High Carbs with 300gm carbs and 147 gm of which 300 gms were from sugar GROUP B: Keto group with 31 gms of carbs and 10 gms of which 31 gms were from sugar Between these two groups, the difference in fasting insulin was 21%. And can you guess what shocking fact was revealed? THERE WAS NO DIFFERENCE IN FAT LOSS. Bottomline: you don’t need to fear insulin; in fact, don’t even bother about it. Fat loss or fat gain will depend upon your energy balance (energy in vs. energy out), independent of insulin fluctuations. THE KEY TAKEAWAY-: Stop Demonising Carbs! References- 1.https://www.ncbi.nlm.nih.gov/m/pubmed/27385608/ 2.https://www.ncbi.nlm.nih.gov/m/pubmed/11093293/ 3.https://www.ncbi.nlm.nih.gov/m/pubmed/9094871/ 4.https://academic.oup.com/ajcn/article/104/2/324/4564649 5.https://www.ncbi.nlm.nih.gov/m/pubmed/22647249/

you never know this studies...these are sponsered by MNCs to sell their sugar filled products like corbonated drinks, chacolates and every other sugar products.