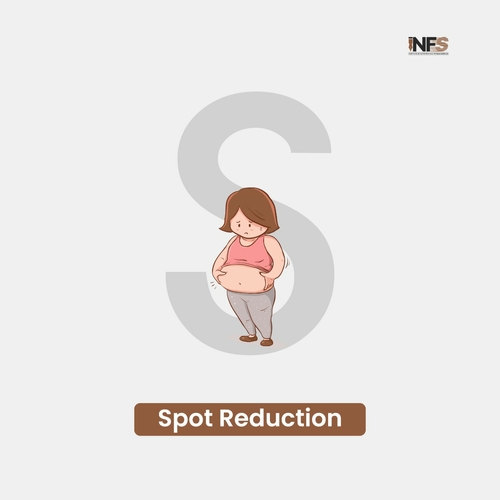 Spot reduction refers to targeting a specific area of the body to reduce fat. Over the years of seeing people doing thousands of crunches and applying cream over their abdomen to burn that extra belly fat, it has now widely believed that Spot Reduction is possible whereas it is just a myth.

Fat, inside our fat cells is in the form of Triglycerides. This is broken down into free fatty acids and glycerol which enter into the blood stream that is circulated throughout the body. Target fat loss is hence might not be possible and the most crucial aspect of fat loss is creating a caloric deficit with sufficient amount of protein and resistance training to minimise muscle loss. A study in 2017 by Scotto di Palumbo et al (1) showed significant difference in fat mass being reduced upon doing targeted resistance training across specific muscle groups. Two groups, one of which followed upper body resistance training and the other group which performed lower body resistance training followed by cycling over 12 weeks. Group that performed just upper body lost way more fat in arms while the group that performed lower body resistance training saw significant loss in fat in lower body compared to arms. Though this was just one study with a very small sample size, it does show a possibility that local muscular work could increase mobilization of local fat tissue but more research is necessary to be absolutely sure about the same. 1.di Palumbo Scotto, A., Guerra, E., Orlandi, C., Bazzucchi, I., & Sacchetti, M. (2017). Effect of combined resistance and endurance exercise training on regional fat loss. The Journal of sports medicine and physical fitness, 57(6), 794-80 Content by : Anshul Dhamande

so is spot reduction a myth or truth?