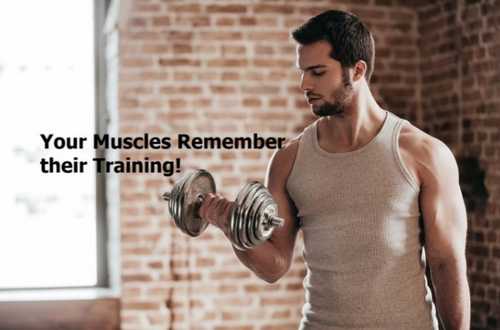 You will lose all that muscle mass when you quit lifting.” (Bro-science alert)

This is perhaps one of the most overrated statements for every newbie when he/she takes up weight training!                                                                                  Worried about what happens when you quit lifting?   What is muscle memory? Muscle memory is the term used to describe an activity your body adapts to perform easily after it has been attempted a number of times. Just like when you see a derogatory comment on your Facebook post and you punch back in response without even looking at your keyboard, knowing precisely what to say… we all have been there, haven’t we? Muscle memory has an effect on strength training as well. Before going into the nitty-gritty of how and to what extent, we’ll get acquainted with the basics: One muscle fiber is made up of several myofibrils just like a like a rope with  multiple joints of threadsThese single muscle fibers are bound together to form a fascicle which are further bound together to make muscle organs. Much like small ropes are bound together to make a thick rope.At the base of these muscle fibers are textures called myonuclei.When one performs  weight training, we increase the size of our muscle fiberswhich also leads to fusion of muscle fibers and activation of satellite cells (which is a different story altogether)These satellite cells reward muscle fibers with newer myonuclei as a single myonuclei can only support a limited domain of the cytoplasm and with increased muscle fiber volume the volume of myonuclei are increased.The myonuclei carry your DNA and RNA and help in growing muscle fibers by increasing protein synthesis. Why is it easier to build muscle the second time around? For someone who has trained previously, these myonuclei are still in the same number even if the size of the muscle fiber is reduced. Even with years of detraining and losing muscle mass, these myonuclei are still at large. Muscle fibers (and therefore the myonuclei) remain active throughout our lifespan to most extents even if we are not training. When we restart training, say after a gap of a few months or a few years, these myonuclei help us regenerate our muscle fibers at an increased rate as compared to someone who is starting afresh.      What that means is that someone who has trained for years and took a gap from training for a few months, can meet his earlier muscle size and strength in a matter or weeks – He won’t have to start from the scratch, isn’t that absolutely brilliant?     Ageing and muscle memory When we age, it is known that we start losing muscle mass. Our body also shows a decrease in the rate of growing muscle fiber due to reduced function of satellite cells as well as reduced number of satellite cells. Therefore, increasing myonuclei after a certain age is slowed down and at times, may come to a halt. However, people who have trained before are at an advantage as they will face the issue at a slower pace as compared to someone who didn’t perform strength training at all – thanks to our beloved friend – the myonuclei. Even at an older age, a person who has an illness, or is losing muscle mass due to aging, can retain quite an bit of his previous muscle mass if they have trained in their young years. The same cannot be said for endurance training athletes, another reason to stick to weight training and not focus on endurance training. So, lift those weights and give your muscles a learning that will last a lifetime!   Article Credits – Mukund Dawra