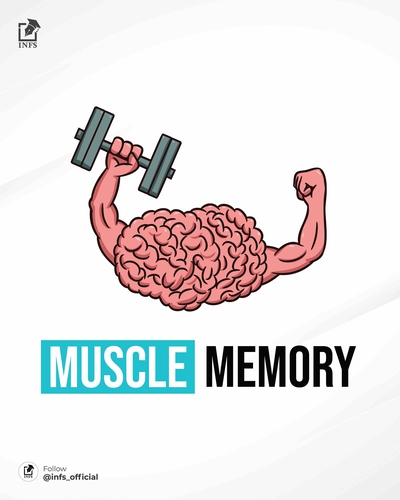 Muscle and strength loss is evident if there is a long break in training. Break in training could be due to situations such as hectic work schedules or an acute injury where you will have to give up on training to help recover yourself. Many people in such situations are worried not just about losing muscles but also about the time & effort it will require to gain everything back. But it has been seen that once you are back to training, you will gain muscle mass in a much shorter time period than it did to gain the first time. This is Muscle Memory. Muscle memory describes the phenomenon of muscle fibers regaining size and strength faster than initially gaining them. This phenomenon is proven as well. A study in 2018 in which participants went through 7 weeks of training, detraining and retraining each looked after the genome modifications and it showed a clear mechanism behind muscle memory. (1) There is also another hypothesis behind muscle memory related to the cell nuclei inside the muscle fibers. It says that during training, the number of satellite cell nuclei increases, and they are not lost even after a long gap in training. But more research in humans is necessary to prove this claim. Conclusion With the current research, we can say that Muscle Memory exists and that it’s okay to rest in situations that require being away from training. Worrying about progress or trying to get back sooner might lead to hindrance in recovery. Just rest, you are only going to come back stronger! Reference: Seaborne, R. A., Strauss, J., Cocks, M., Shepherd, S., O’Brien, T. D., Van Someren, K. A., ... & Sharples, A. P. (2018). Human skeletal muscle possesses an epigenetic memory of hypertrophy. Scientific reports, 8(1), 1-17. https://pubmed.ncbi.nlm.nih.gov/29382