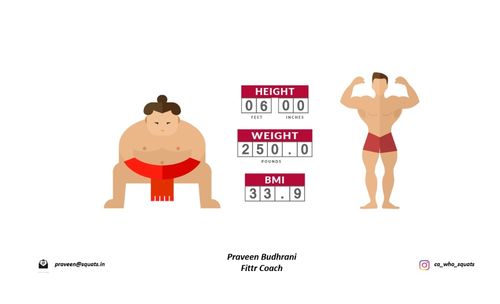 Is your weighing scale lying about your progress ????

Others
Coaches often get queries from mentees, that they are not seeing any change in weighing scale or rather seeing very slow changes in weighing scale, despite of being on calorie deficit for a long period. This is because they tend to think “Calorie deficit will lead to weight loss”, as a definitive rule of thumb, which of course is true in the larger scheme of things, but when we take specific cases, we cannot disregard the fact that there is something called as “Body Re-composition”, which is not only possible but also expected and desirable. Body re-composition is a situation where we lose fat and put on muscle at the same time.

A 2011 study done by Garthe L and colleagues,on 24 elite athletes to understand the effects of rates of weight loss on body composition, strength and power related performance. Athletes were divided into two groups of slow reduction group (SR) and fast reduction group (FR). The SR group targeted weight loss of 0.7% per week, whereas FR group was targeting 1.4% weight loss per week and both the groups included 4 resistance training sessions per week. Further, SR group spent almost 9 weeks following a regime and FR group spent almost 5 weeks following the regime, the variation in diet is probably to equate the net calorie deficit over time. The results were that both the group lost almost same amount of Fat mass, i.e., 5.5% however SR group gained LBM (Lean Body Mass) of 2.1% as against FR group who lost LBM of 0.2%. Thereby, concluding the fact that body re-composition is reality and can be achieved when we do not go too aggressive on our calorie deficit rate. But before we expect too much, let us understand that the population of athletes used for the study were footballers, volleyball players, hockey players, cyclist etc. and there were no elite body builders or any sports athletes who are required to be highly resistant trained. So perhaps there is some “Beginner Gain” phenomena which is might be coming into play and body re-composition might not be possible if you are an intermediate/advanced level lifter. Also, Dr. Eric Helms consolidating the data points of 5 studies (referenced below) concluded that body re-composition is a reality but the magnitude of the same kept on reducing as we moved from untrained to trained lifters. Further, Body re-composition is also possible if a person is coming from an injury or was not able to train for a longer period due to other priorities, because of the concept of muscle memory. Where although a person loses muscle mass during his training break but myonuclei of muscle cells tend to stick around, which can ramp up the muscle building process once that person starts lifting again. Practical Takeaway: (i) As a beginner, following a small calorie deficit spread over a longer period instead of aggressive calorie deficit for a short period, works better for body re-composition. (ii) Mirror can be a superior tool to measure progress as compared to weighing scale alone, so next time when you bother about scale not moving, you might want to check your progress in mirror. (iii) Although, body re-composition is a reality but if you are intermediate / advanced lifter, it does make more sense to have thoughtful bulking and cutting cycles, to see any visible changes and progress over a long run. Cheers !! Reference : Study on Elite Athletes https://www.researchgate.net/publication/51113664_Effect_of_Two_Different_Weight-Loss_Rates_on_Body_Composition_and_Strength_and_Power-Related_Performance_in_Elite_Athletes Research papers used by Dr. Eric Helms https://www.researchgate.net/publication/283260597_A_high_protein_diet_34_gkgday_combined_with_a_heavy_resistance_training_program_improves_body_composition_in_healthy_trained_men_and_women-A_follow-up_investigation https://www.ncbi.nlm.nih.gov/pubmed/24834017 https://www.ncbi.nlm.nih.gov/pubmed/26246322 https://www.ncbi.nlm.nih.gov/pubmed/19106243 Muscle Memory https://www.ncbi.nlm.nih.gov/pubmed/26792335

thanks a lot ... appreciate your feedback