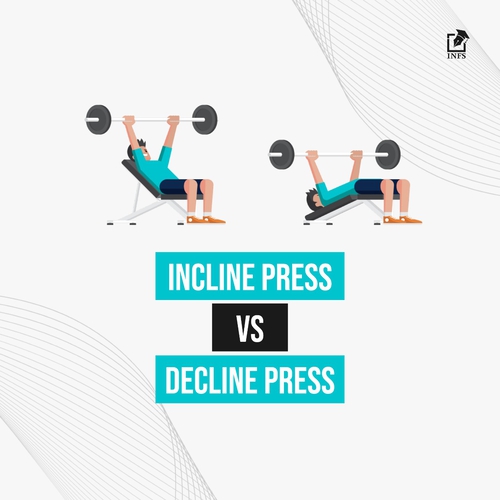 Our muscles are made up of a number of muscle fibres, each of which has a different origin, insertion, orientation, and function. Therefore, to target all the muscle fibres sufficiently, it is recommended to train the muscle groups from different planes and angles. This is why you will find many people training the pectoral (chest) muscles from multiple angles. So, let’s have a look at how incline and decline presses affect the muscle differently to understand this better. The prime movers in all the variations of chest presses are pectoralis major, anterior deltoids, and triceps brachii. With the change in the angle of the bench, the relative activation of the muscles also changes. The anterior deltoids, upper pectoralis major, and triceps brachii muscles are most active during the incline bench press. In contrast, lower pectoralis major muscles are most active during the decline bench press [1,2]. Thus, if your goal is the overall development of the pectorals, it is recommended to train them from different angles. Yet, if you lack development in certain areas, you can use these pointers to train the weaker parts. References Lauver, J. D., Cayot, T. E., & Scheuermann, B. W. (2016). Influence of bench angle on upper extremity muscular activation during bench press exercise. European journal of sport science, 16(3), 309-316. Saeterbakken, A. H., Mo, D. A., Scott, S., & Andersen, V. (2017). The effects of bench press variations in competitive athletes on muscle activity and performance. Journal of human kinetics, 57(1), 61-71.