Extra Virgin Olive Oil: A mere dressing in your salad 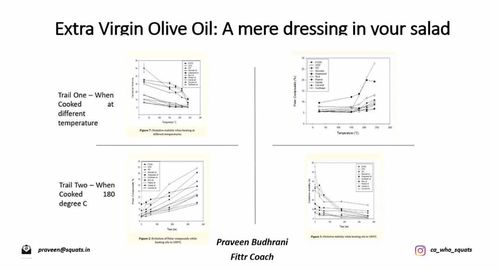 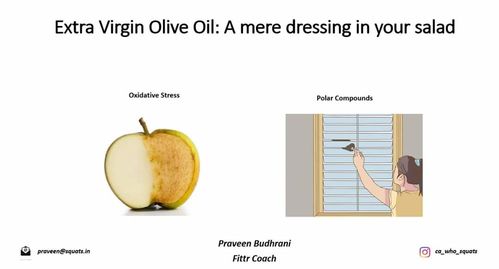 Next
Edible oils are one of the important part of our dietary consumption. Not only do they provide many health benefits and are great source of saturated fats but also help aid cooking food and make our food tastier to consume. Few of the examples of the popular edible oils are; Olive Oil (OO), Coconut Oil (CoO) , Canola Oil (CO) , Rice Oil (RO), Extra Virgin Olive Oil (EVOO) and Sunflower Oil (SO) etc. Different oils have different health benefits and whether the oil is good to be used in a certain away (Deep fry, shallow fry, dressing etc.), if often also the function what is called to be their Smoke Point.

For those, who don’t know, Smoke point refers to the temperature at which an oil starts to burn and smoke. When you cook with the oil that’s been heated past its smoke point, not only does oil loses its benefits but also become harmful for our wellbeing (Although more research is required on the same). Typically, when we cook food at our kitchens , cooking temperature can go to as high as 180 degree C, while preparing foods of vegetables and animal products. This article is to specifically, talk about the misconceptions pertaining to the fact that EVOO is not a good choice for pan frying and deep frying because of its low smoke point and it should be used as a dressing/dips/drizzles in salads/pastas and various other foods or even applying to your hair rather than cooking. As per the research, EVOO form an important part of the Mediterranean Diets, which is often considered helpful in case lowering of heart disease, improving cardiovascular health and also providing anti-inflammatory benefits. (https://www.ncbi.nlm.nih.gov/pubmed/30487558, https://www.ncbi.nlm.nih.gov/pubmed/29141570). However, people often don’t use EVOO as their preferred options for cooking or as a frying oil, because of the reason as stated above, when compared to other popular cooking oils like; Coconut Oil, Canola Oil and Sunflower Oil etc. Now, as per the RCT study published by De Alzaa F and Collegues on May, 2018 to understand the degradation in oils when exposed to Deep frying or Pan frying, where publishers used samples of ten most commonly used cooking oils in Australia (high quality extra virgin olive oil (EVOO), virgin olive oil (VOO), olive oil (OO), canola oil (CO), rice bran oil (RO), grapeseed oil (GO), coconut oil (CoO), high oleic peanut oil (PO), sunflower oil (SO) and avocado oil (AO). Method of RC Trails : (I) Oils were heated in a Pan fryer from 25 C to 240 C and samples of each oil was collected at 150 degree C, 180 degree C, 210 degree C and 240 degree C. The overall time taken to reach highest temperature was approximately 20 mins. (II) A sample of 3L of each oil was heated in a Deep fryer at 180 C, which is highest recommended temperature for deep frying for 6 hours and samples of each oil was collected at 30 degree C, 60 degree C, 180 degree C and 360 degree C. The initial characterization of the oils was based on parameters including the Smoke Point. The study found out that smoke point is not a best predictor of oil degradation when exposed to Deep Frying and Pan Frying as per above trails. It is actually, the oxidative stability and estimation of Total Polar Compounds generated, which are more reasonable predictors degradation of oils, basis their relationship with heat. To put it simplistically, (i) Think of oxidative stability/stress, as an erosion in any matter caused due to its exposure of oxygen, like when we keep pealed apple in open space, it gets degraded/ruined. (ii) Think of Polar Compounds, as a dust which comes into your home because you have kept your windows open for a certain period to enjoy fresh air (here is cooking is like a open window and polar compounds are like dust that comes in with it). Conclusion of study (Refer graphical in Image): The results under both the trails observed that the EVOO has demonstrated to be the most stable oil when heated under both the scenarios, followed closely by coconut oil and other virgin oils like avocado and high oleic acid seeds oil. Key Takeaway: (i) Smoke point is not the sole parameters for determining the degradation of oil to pan frying or deep frying, in fact oxidative stability and estimate of polar compounds, are factors which matter more than smoke point. (ii) Lastly, it is completely acceptable to use Extra Virgin Olive Oil for pan frying or for deep frying your vegetable and animal products. So enjoy Cheers, Praveen Reference : https://actascientific.com/ASNH/pdf/ASNH-02-0083.pdf #fittr