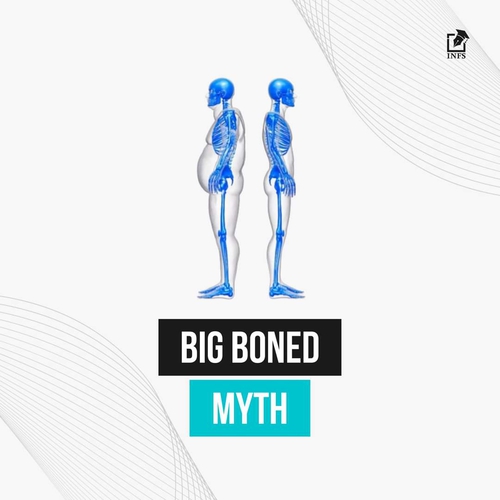 Can you be Big Boned? We often hear people saying, “I am not fat, I just have big bones” or “I am not overweight, it’s just that my bones are bigger” While it is a fact that people do come in different shapes and sizes when it comes to their skeletal structure but does it impact so much that it makes you fall into the category of being overweight? As per the study conducted by the National Center for Health Statistics, across 15 countries of United States on three major U.S. ethnic groups: Non-Hispanic Whites (hereafter referred to as White), Non-Hispanic Blacks (hereafter referred to as Black), and Mexican Americans. They found out that the average Skelton weight in females is about 3-4 Lbs. and in males, it was about 5.5 to 6.5 Lbs., with the heaviest skeleton being only around 11 Lbs. [1]. On a relative basis, bone weight contributes to around 3-4 percent of the total body weight. So, considering the fact bone weight is very less compared to the total body weight, the myth that we are overweight because of being thick/big-boned is busted. Reference: [1] Kelly, T. L., Wilson, K. E., & Heymsfield, S. B. (2009). Dual-energy X-Ray absorptiometry body composition reference values from NHANES. PloS one, 4(9), e7038.

Very informative for me, I also used this as an excuse till now.