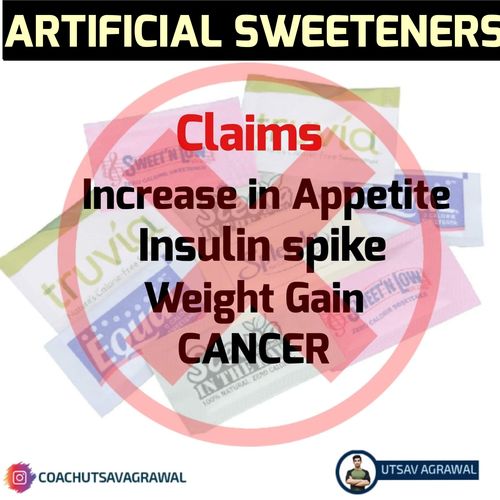 Artificial sweeteners are often considered to be something harmful fo your health and there are a lot of false claims propagated against it. Let's understand what science has to say about them

Claim 1- Increase in appetite Artificial sweeteners do NOT increase hunger signals and “cravings”. In a study it was found, groups consuming a sweetener laden drink ate 300kcal less over the day than the group consuming a sugar-sweetened drink (Anton SD, et al. Appetite. 2010.) Claim 2- Insulin Spike Artificial sweeteners do NOT “trick” your body into releasing insulin. In study subjects who consumed a drink laden with stevia or aspartame did not see an insulin/glucose response. The group consuming the sucrose control certainly did (Anton SD, et al. Appetite. 2010.) (Higgins KA, et al. J Nutr. 2018) Claim 3 - Causes cancer A multitude of studies has shown NO association between artificial sweeteners and the incidence of cancer. In a study, there was no association between artificial sweeteners (mainly aspartame) and gastric, pancreatic and endometrial cancer with that of the control group (Bosetti C, et al. Cancer Epidemiol Biomarkers Prev. 2009) Claim 4 - Increase in weight In a 12 week study, there was NO impact on body weight, appetite, glucose or insulin levels in lean healthy adults. The high aspartame consuming group consumed 1050mg/day, that’s about 6 Diet Coke’s (Higgins KA, et al. J Nutr. 2018) Takeaway - Artifical sweeteners can make your job easier of sticking to a diet as it might help tackle cravings. Artificial sweeteners are perfectly SAFE and should not be avoided or feared if it creates adherence to your diet!

is Stevia a good substitute to these sweeteners?