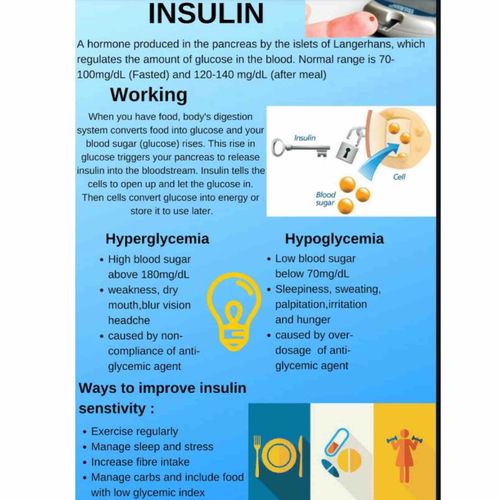 #INSULIN Insulin is a peptide hormone that is secreted by beta cells of pancreas which is located behind your stomach. Its main aim is to metabolise carbohydrates, fats and proteins. Insulin allows cells to take up glucose and use it for energy production. Normal range of blood glucose is 70-100mg/dL (Fasted) and 120-140 mg/dL (after meal) 𝗪𝗢𝗥𝗞𝗜𝗡𝗚 : Whenever you have food, it get breakdown and glucose is released. that glucose is absorbed from our gut in to our bloodstream and transported to different parts of body. this lead to raise in blood glucose level. Now, insulin is released in blood so that cells use the provided glucose for their energy production. 𝗚𝗟𝗨𝗖𝗢𝗦𝗘 𝗛𝗢𝗠𝗘𝗢𝗦𝗧𝗔𝗦𝗜𝗦 Beta cells are sensitive to glucose concentration in your blood, also know as your blood glucose levels. when the blood glucose levels are high, secretion is increased and when blood glucose level is low, secretion is reduced or stopped. The Alpha cells work along with along with beta cells. When blood glucose is low then alpha cells command liver to release glucose in blood by glycolysis which raised the blood sugar level and maintains a balance. 𝗧𝗬𝗣𝗘𝟭 𝗗𝗜𝗔𝗕𝗘𝗧𝗘𝗦 : 𝗜𝗻𝘀𝘂𝗹𝗶𝗻 𝗱𝗲𝗽𝗲𝗻𝗱𝗮𝗻𝘁 This is an auto immune disorder. In this your body is not able to make insulin as all the insulin making cells of pancreas have been destroyed. As these patients cannot make insulin hence injectable insulin is required for these patients. 𝗧𝗬𝗣𝗘𝟮 𝗗𝗜𝗔𝗕𝗘𝗧𝗘𝗦 : 𝗡𝗼𝗻-𝗶𝗻𝘀𝘂𝗹𝗶𝗻 𝗱𝗲𝗽𝗲𝗻𝗱𝗮𝗻𝘁 In this your body becomes resistant to insulin. That means your body require more amount of insulin for same amount of glucose. Pancreatic cells start to make additional insulin, but after years of over-working the insulin cells get burned out. These patients can be treated with oral medications and life style changes, but in later stages injectiables are required. 𝗧𝗬𝗣𝗘𝗦 𝗢𝗙 𝗧𝗥𝗘𝗔𝗧𝗠𝗘𝗡𝗧𝗦 The basic aim of medical insulin is to increase/decrease insulin levels or can say maintain the homeostasis. there are various types of insulin as per their time of action and how much time the effect can last: >𝐑𝐚𝐩𝐢𝐝-𝐚𝐜𝐭𝐢𝐧𝐠 𝐢𝐧𝐬𝐮𝐥𝐢𝐧: This type of insulin begins working approximately 15 minutes after injection. Its effects can last between three and four hours. It's often used before a meal. >𝐒𝐡𝐨𝐫𝐭-𝐚𝐜𝐭𝐢𝐧𝐠 𝐢𝐧𝐬𝐮𝐥𝐢𝐧: You inject this insulin before a meal. It starts working 30 to 60 minutes after you inject it and lasts five to eight hours. >𝐈𝐧𝐭𝐞𝐫𝐦𝐞𝐝𝐢𝐚𝐭𝐞-𝐚𝐜𝐭𝐢𝐧𝐠 𝐢𝐧𝐬𝐮𝐥𝐢𝐧: This type of insulin starts working in one to two hours after injection, and its effects may last 14 to 16 hours. >𝐋𝐨𝐧𝐠-𝐚𝐜𝐭𝐢𝐧𝐠 𝐢𝐧𝐬𝐮𝐥𝐢𝐧: This insulin may not start working until about two hours after you inject it. Its effects can last up to 24 hours or longer. 𝗛𝗬𝗣𝗢𝗚𝗟𝗬𝗖𝗘𝗠𝗜𝗔 It is a condition in which blood sugar levels drops drastically (mainly due to excess insulin in blood), below 70mg/dL. It is a critical condition and require immediate action as ignorance can lead to patient in coma or even death. Symptoms can be irregular heart rte, fatigue, palpitation, irritation, sweating and unconsciousness. Immediate action should be to increase blood sugar level by medicine or by some sweet candy or such item. This is common in patient who are on medicinal insulin as sugar level drops after taking medicine. Also, for such patients carbohydrates should be distributed throughout the day. 𝗛𝗬𝗣𝗘𝗥𝗚𝗟𝗬𝗖𝗘𝗠𝗜𝗔 Hyperglycemia is nothing but high blood sugar level (mainly due to lack of insulin in blood), above 180-200 mg/dL. Hyperglycemia is not as dangerous as hypoglycemia but continuous high levels of sugar can affect other organs in long term like kidney, eyes and heart. Some of initial symptoms are frequent urination, thirst, blurred vision and fatigue which can increase to weakness, nausea, vomits, shortness of breath and even coma. It can even lead to a condition called Ketoacidosis on which ketones are found in blood and urine.Any person suffering from regular hyperglycemia should take medical advice and if you are taking medicinal insulin then person need to keep of his blood sugar by regular monitoring, keep track of dietary carbs in each meal and keep medicine constant. Also, before starting any physical activity take advice from doctor and monitor your blood sugar level before,during and after the activity. 𝗜𝗡𝗦𝗨𝗟𝗜𝗡 𝗔𝗡𝗗 𝗕𝗢𝗗𝗬𝗕𝗨𝗜𝗟𝗗𝗜𝗡𝗚 Now, the above mentioned states that Insulin is one of the most essential hormone of our body and we cannot survive without it. But do you have any idea how and why it is used/abused in bodybuilding arena? Its basic function that it directs cells to uptake blood glucose for energy production is the reason for it. It helps volumize each cell and produces anabolic effect. Bodybuilders use it to improve stamina and endurance. Also, it is used to increase muscular bulk as it promotes glycogen formation, which is used as energy resource during workout. Bodybuilders usually take it in injectable form during bulking cycles. Although illegal, this drug is not detectable in any dope test. But the usage is very dangerous, Improper use of insulin can lead to the person developing diabetes mellitus, long-term organ damage, coma, or death. Symptoms of insulin shock include sweating, a clammy feeling, paleness, hunger, anxiety, trembling, rapid heartbeat, fainting, weakness, irritability, change in personality or mood, and loss of consciousness. A person exhibiting these symptoms needs immediate medical attention. Also, sweet things like dates, jelly, honey is taken along with the dose so as to reduce chances of hypoglycemia. 𝗛𝗼𝘄 𝘁𝗼 𝗺𝗮𝗻𝗮𝗴𝗲 𝗶𝗻𝘀𝘂𝗹𝗶𝗻 𝗹𝗲𝘃𝗲𝗹? > Exercise regularly > Manage stress > Include carbs with low glycemic index in your diet > Loose some pounds > Manage sleep > Quit smoking >Increase fibre intake